Illuminating the Path of the Righteous Man

Illuminating the Path of the Righteous Man 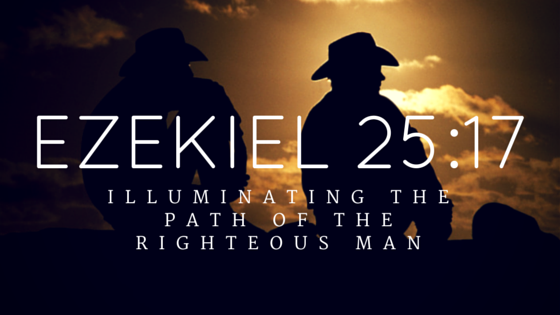 Ezekiel 25:17 – The path of the righteous man is beset on all sides by the inequities of the selfish and the tyranny of evil men. Blessed is he, who in the name of charity and good will, shepherds the weak through the valley of darkness, for he is truly his brother’s keeper and the finder of lost children. And I will strike down upon thee with great vengeance and furious anger those who would attempt to poison and destroy my brothers. And you will know my name is the Lord when I lay my vengeance upon thee.

Recently, and I don’t know why, I have found myself thinking a lot about the scene in Pulp Fiction when Jules is surmising to Ringo about the potential meanings of Ezekiel 25:17 from Jules’ newly adopted paradigm of having survived an attack with a “Goddamn Hand-Cannon!!”.

I remember seeing the movie at a late night showing and being struck by and associating greatly with the vulnerability that Jules displayed in this scene… albeit while stuffing the barrel of his gun in Ringo’s face.

He supposes that, Ringo’s the evil man, he is the righteous man and that “Mr. 9mm here” is the shepherd protecting “His righteous ass in the valley of darkness”.

Or that Ringo’s the righteous man, he is the shepherd and it’s the world that’s selfish and evil.

He concludes that Ringo is the weak and that he himself is the tyranny of evil men.

Jules presents each of these scenarios from the perspective of how he interacts with the world and those who reside in it…. i.e. Ringo.

I think there is another perspective we can adopt.

Maybe all these characters, the righteous, the evil, the selfish and the weak, all reside within each one of us and that the “path of the righteous man” is an intangible internal journey that we either engage with or ignore.

Perhaps “the shepherd” is that part of us, totally awake to the inequities and tyranny we inflict on ourselves. (Tweet this)

He struggles to be heard, when trying to bring our attention to the dangers lurking in our own valley of darkness. Perhaps it’s easier for us to turn away from the shepherd, to not listen, to not engage with the righteous path, to ignore the signs. But, in the long run, that is the rock on which we perish.

Now, far from being some “cold blooded shit to say to a mother f&*ker before I pop a cap in his ass”, having never popped a cap, let alone in someone else’s ass. I do find this passage carries massive weight for me right now, when I view it from the paradigm of this internal realm of demons and angels that exists within me.

You see, I conclude that I am the weak, having allowed my self fall under the governance of my own selfish inequities.

I’m trying real hard, to be the shepherd!