How to Empower Through Effective Delegation 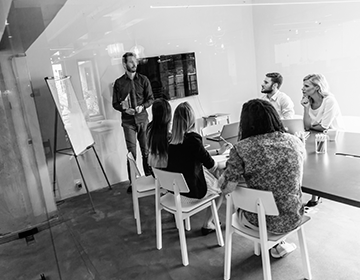 How to Empower Through Effective Delegation

Far from the empowering experience of being trusted, supported and developed to a level above that at which you are right now, I’ve found of late that peoples’ understanding of “Delegation” is something less than it should be.

When the topic was brought up in one of my recent leadership development programs, ahead of a session on Situational Leadership, the participants found it difficult to detail the delegation process at all.

I guess it was a little like asking a pro tennis player to explain how they execute their serve… They just do it!

Or Peter Pan, trying to explain to Wendy, Michael and John how to fly… he’d never really thought about it….

“Just doing” the things you have “never really thought about” can lead you some places to which you would rather not have gone.

Never-the-less, an interesting exploration ensued and whether we were discussing their own approach to delegation, or their experience of being delegated to, it transpired, their experiences had been much less that of “Delegation” than of “Abdication”.

So we set about defining the process together before we stepped through the Situational Leadership model.

Funnily enough, the delegation process flow we agreed as a group, fit very nicely onto the Situational Leadership model…. Well, it wouldn’t be a very good model if it didn’t. 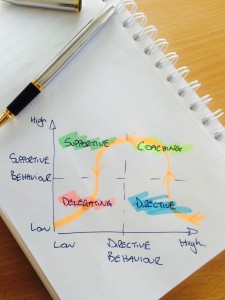 The continuum goes from low to high in both cases.

The quadrant is constructed of four styles:

Much like the communication styles I introduced in a previous blog post, we tend to gravitate toward one or two of these styles as a preference, to the point of potential overuse. This group was no different and they were able to identify the ones they used most.

The positioning of these styles in the quadrant proved to be a little counterintuitive throughout our discussion.

Directive, being the first style, is placed as Low in Supportive behaviours and High in Directive behaviours. This made complete sense and didn’t cause any issue at all. In this style we are talking about being prescriptive and clear about exactly what is expected and why it is expected.

This part raised some eyebrows. It seemed the words ‘coaching’ and ‘directive’ residing in the same sentence did not compute.

The whole purpose of coaching is for the solution to come from the person being coached, not for the coach to direct the person to the desired solution.

Of course, I agreed whole-heartedly with the participants’ assessment, but we needed to take a step back and look at it from a process perspective.

A coaching conversation is not a meandering catch-up session over a coffee, although I do like a cup of java while “shrinking heads”. There is a formalized structure that exists to help everyone get the very best out of the time spent in the coaching conversation. These structures are the coaching models … GROW, PRO, Achieve, CRAIC(yes that’s “craic” a very Irish model, check it out) and the hundreds of other models there are out there.

The coach must be directive around the structure of the coaching conversation. Whether using GROW , PRO or any coaching model, the role of the coach is to remain true to the process while facilitating an environment within the conversation where exploration can happen.

So, when coaching, the content is not directed, but the process or flow of the conversation absolutely is. (Tweet this)

Once we had all agreed on this, the third leadership style, Support, made complete sense, High in Supportive and Low in Directive. Here we’re talking about a little cheerleading, championing the person’s strengths, providing access to resources and, when needs be, adding a little weight with your name or position.

The final style, Delegation, was where the “light bulb” moment occurred for a number of the participants. Being Low in Directive behaviours and Low in Supportive behaviours, it sounded a little “Harsh”. Indeed the realization was, that in the absence of the other styles, this definition of Delegation was, in fact, Abdication. Throw the brief on the desk and walk away.

Taking that realization a little further we concluded, that while Delegation is a style in its own right,

True Delegation is the destination of a diligent practice of Directive, Coaching and Supportive behaviours. (Tweet this)

When we addressed this in the context of each participant’s preference toward the use of one or other of these styles, it became easy to identify areas for improvement in their delegation efforts.

When we delegate, we pass responsibility and retain ultimate accountability for the completion of the task.

We cannot “just delegate”. Delegation is an investment of time and effort in:

Only when trust has been built through iterations of this process, can you chuck the brief on the desk and take a hike, secure in the knowledge that the job will get done, because everyone knows what they are at!

Now get to it!! And if you feel like engaging with this conversation, leave me a comment.